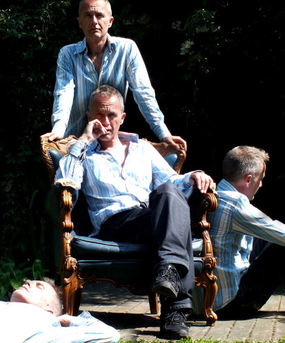 Mei was born sometime last century and is, contrary to the belief of those who have seen him in the mornings, very much alive.

Educated in Belgium as a child and later at Westminster College, Oxford, he had been teaching English as a foreign language for a quarter of a century. Once his education was over, he claims he started learning.

More recently, Mei has found success taking pictures of all and every thing and now runs www.iSourceArts.com. He has maintained that "once you have tasted the air of Africa, you are forever an exile" since his first trip to East Kenya back in the 80s.

He has lived in several countries in Europe since leaving home at 17 and, not being able to stay silent for too long, is fluent in French, German, Italian and would love to add Swahili and Welsh, his mother tongue, but can't.

Mei started dancing when he returned to the UK at the turn of the millenium and has never looked back. His one man mission to put the sauce back in salsa and the fun back in dance is an on-going commitment. Dance2Learn is Mei's way of trying to give back a little.

Mei co-produced “Shark!” and directed "R.U.R" for Brighton Festival. He has also had several exhibitions including "Household Retrospective", an environmental sculpture & "Breakfast With Miss Whale" (Brighton Institute of Contemporary Art). His misguided need to entertain has seen him write and compere :
• 'Rabble Without Applause'
• 'Beast Of Edam'
• 'Summer Holiday on Ice'

Having provided the photograph for the poster, Mei appeared as both Riff Raff and Brad Majors simultaneously in the Rocky Horror Cabaret Show.

In 2010, Mei took on the role of Editor of the local Village Magazine in Kington Langley, only giving up when the village was no longer HIS village. Now, as a foreign tour guide, he's taken an interest in how things were as well as how things should be.

Enjoying communication and sharing his passions, Mei has also been a contributer to a variety of blogs and a featured photographer. He enjoys music with soul, art, a wry comedy and has lately realised that the good old days weren't.

Mei is alive and with his favourite person; a photogenic one-eyed cat called Simon and a demanding Welsh Terrier called Presley
Mei Catherall | Create your badge